For late-stage dry age-related macular degeneration (AMD), also known as geographic atrophy (GA), there is currently no available treatment, other than vitamins which only work in early-mid stages.

But encouraging signs are emerging from the University of Florida, where scientists working on a grant from Macular Degeneration Research (MDR), a BrightFocus Foundation program, are seeing signs of hope from experiments that repurpose a currently-approved cancer drug to treat GA.

The researchers, Alfred S. Lewin, PhD, and Manas Biswal, PhD, recently discovered a potential use for an experimental cancer drug called xaliproden. Dr. Lewin is the winner of the MDR program’s 2015 Elizabeth Anderson Award and its accompanying research grant. The condition they are studying, dry AMD, accounts for some 90 percent of all AMD, and GA is the most severe form of dry AMD.

Image courtesy of the Lewin lab, University of Florida
In mice with oxidative damage to the RPE, electron microscope images reveal vacuoles in the RPE and broken photoreceptors (Image A), whereas daily oral treatment with xaliproden preserves the normal structures of the cells at a low dose (0.5 mg/kg, Image B), or a high dose (3 mg/kg, Image C).

While there are some genetic susceptibilities, AMD is mostly caused by stressors inside the eye, such as drusen (lipids, a type of fatty protein in the retina) and poorly nourished cells; and also by stressors outside the eye, such as smoking and excessive exposure to sun. Over a lifetime, this damage accumulates, causing oxidative stress and inflammation, both of which damage the retinal pigmented epithelium (RPE), a layer of cells next to the retina whose purpose is to nourish and maintain the retina’s delicate photoreceptors. With age, the eye has a harder time protecting itself from these stressors and getting rid of them, which explains why age itself is the biggest risk factor for AMD.

[RPE is considered the “birthplace” for AMD. Learn about additional BrightFocus-funded research into ways to protect the RPE and retina in our Science News report, RPE: The Eye’s First Line of Defense Against Macular Degeneration.]

Virtually all AMD starts out “dry”; however, if AMD worsens and progresses to advanced stages, many people will develop fragile, leaky blood vessels in part of the eye near the retina, known as “wet AMD.” For that, treatments do exist.

In a smaller proportion of late-stage AMD, there is no crossover to wet AMD, yet the disease still damages the deepest cells of the retina. “Atrophy” refers to the death of cells; in GA, what a doctor sees in a dilated eye exam are isolated areas of dead and damaged cells surrounded by living cells in the retina. So far, no treatments exist to stop the damage and prevent vision loss.

Drs. Lewin and Biswal found that in both cultured cells and mice, xaliproden protected against RPE cell damage. Following its use, there was a dose-dependent increase in cell survival, increased synthesis of several antioxidant response genes and other protective enzymes, and diminished production of pro-inflammatory factors and vascular endothelial growth factor (VEGF) protein. VEGF overproduction can be a response to RPE damage, contributing to neovascularization—the growth of fragile leaky blood vessels seen in wet AMD.

Lewin and Biswal found that daily administration of xaliproden increased the thickness of the RPE, as well as reduced vacuolization and disorganization of the photoreceptor outer segments, both of which are seen in stressed RPE tissue. (Vacuolization refers to the formation of small cavities or spaces in tissue in nervous tissue as the result of disease.) In addition there was improved visual acuity in treated mice relative to controls.

Earlier this year, the team published their MDR-funded work in Molecular Vision (Ahmed et al, 2016) and the results were reported at the annual meeting of the Association for Research in Vision and Ophthalmology.

Their results suggest that xaliproden may be used to prevent the progression of GA in humans. However, its development as a treatment for this final stage of dry AMD is still in the earliest stages, and the additional work and testing that are required are likely to take years and great expense. There are some encouraging signs in accelerating this timeline. Because xaliproden has already been tested in advanced clinical trials for other diseases, its repurposing for GA could proceed faster than most drug development.

In the following interview, Drs. Lewin and Biswal describe their discovery, what is needed next to develop xaliproden as a treatment for GA, and how we can alleviate some of the stressors leading to AMD in our eyes as we age.

An Interview with the Scientists Behind this Discovery 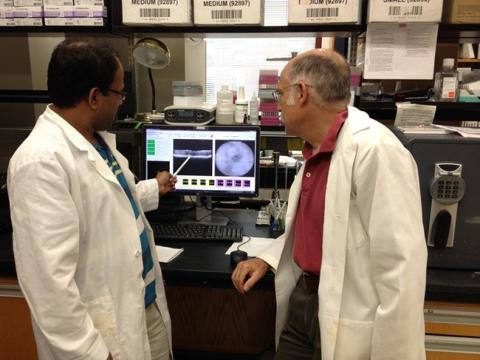 Q. Congratulations on your work involving xaliproden! How did you discover it might useful to treat dry AMD?

A. We tested xaliproden because of earlier work done by an Alcon research scientist, R.J. Collier and colleagues. They tested an injectable compound that binds to the 5HT1a receptor and found that it prevented light induced injury in an animal model. Alcon then conducted a clinical trial with a topical drug of the same class to treat geographic atrophy. That trial was not successful, but it is difficult for drugs to reach the back of the eye from the cornea, so we reasoned that systemic delivery would be a better approach.

Q. How does it work, and what are you seeing in animal models?

A. In animal studies, the drug was shown to have neurotrophic properties, that is, it protects nerve cells from injury. In our study, we also demonstrated that treatment with xaliproden increased the production of anti-oxidant enzymes in the retina, and that is how we believe it is protecting the retina.

Q. What results are you seeing so far in animal and cell models, and what leads you to believe that xaliproden might work in humans?

A. Xaliproden is attractive because it can be taken orally and was shown to be safe in several clinical trials. The drug is known to cross the blood-brain barrier, so it is [also] expected to cross the blood-retina barrier. Because it is orally available, no injections are required.

While it was not effective in treating ALS (amyotrophic lateral sclerosis), the drug was successful at treating nerve pain resulting from cancer chemotherapy. The safety profile of the drug is good, and side effects are those expected for this class of compounds. In the clinical trials, dizziness and nausea were some of the adverse reactions that were reported.

We have seen that xaliproden significantly reduced the rate of retinal degeneration in a mouse model of dry AMD at doses similar to those seen to be safe in people. Thus we think that this compound can be given to patients with early AMD to prevent the vision loss associated with the late stages of this disease.

Q. What’s needed next for xaliproden to move forward?

A. Since the safety of xaliproden in humans has been established, the next step for testing this drug would be to obtain a sufficient quantity of the drug that is fit for human consumption, and then design and conduct a clinical trial. The budget for such a trial would be quite large and could require interest from a pharmaceutical company.

Q. Has there been any interest so far from potential developers?

A. We have presented this work at conferences and at one drug company, and have also been in touch with Sanofi SA, the company that developed xaliproden. In addition, there are several drugs of the same class already on the market that could be tested for treatment of advanced dry AMD. These drugs are used to treat anxiety (buspirone, tandospirone) or diminished sexual desire (flibanserin).

Q. We’re hearing more about “oxidative stress” that contributes to AMD. Is that something that happens at the molecular level, inside the eye, or outside the eye, like irritation from too much sun, smoke, etc?

A. Oxidative stress is something that happens inside the eye and is a natural consequence of aging. Genetic risk factors may place certain people at increased risk, but normal metabolism produces oxidative stress in the eye and other tissues, placing everyone at some risk. Ask anyone over 60 about skin damage associated with aging [a similar process]!

Q. Are there ways to prevent some of this damage to the eye and other tissues?

A. We can control oxidative stress by following the general health recommendations of organizations like the American Heart Association and the American Cancer Society: Don’t smoke. Drink alcohol in moderation. Eat a balanced diet including green leafy vegetables and orange and yellow vegetables. Get sufficient sleep. Exercise daily. There is some evidence that the combination anti-oxidants and zinc sold at the AREDS formulation will prevent the progression of early AMD to late-stage AMD, but there is no proof that taking these supplements will prevent AMD from starting.

Q. In past remarks, you’ve said “lucky coincidences sometimes drive scientific decisions.” Was “chance” an element in your work?

A. The choice of xaliproden was not an accident. As mentioned, we knew that drugs that bind and stimulate the 5HT1a receptor protected the retina from damage. What was lucky was discovering a method to create oxidative stress in an animal model of AMD. We were trying to target retinal ganglion cells to determine the role of an enzyme called superoxide dismutase on those cells. That research was more relevant to glaucoma. By accident, we placed the needle too deep and got a condition that resembles some aspects of dry AMD. So we tried to develop therapies using this “accidental” model.

Q. Is BrightFocus, through MDR grants, helping to advance good ideas and create an environment that is apt to move drug discovery forward?

A. MDR is funding both targeted research and discovery-based science. By “targeted research,” we mean experiments to test a specific hypothesis, for example, the hypothesis that drugs that bind the 5HT1a receptor can prevent the progression of AMD. By “discovery-based science,” we mean that the investigators conduct a wide variety of tests to see what may lead to new information or to promising therapies. Such experiments would include screening a library of existing drugs for those that protect the retina from injury, or looking at all the changes in metabolism that are associated with progression of AMD.

Q. Where else is your current work focused?

A. We are also trying to develop gene therapies for autosomal dominant retinitis pigmentosa [a rare inherited form of retinal degeneration], and for dry AMD. The retinitis pigmentosa project is designed to replace the mutant form of rhodopsin that is expressed by many people with that disease.  Gene therapy for dry AMD targets oxidative stress and chronic inflammation that are both thought to damage the RPE and Bruch’s membrane [a tissue layer right below the RPE that also is involved in AMD’s onset].