Sarah Doyle Recognized at ARVO for her BrightFocus-funded Work

In just a few days’ time, 13,000 of the world’s vision researchers will arrive in Seattle for the annual meeting of the Association for Research in Vision and Ophthalmology (ARVO), the world’s largest gathering of its kind. 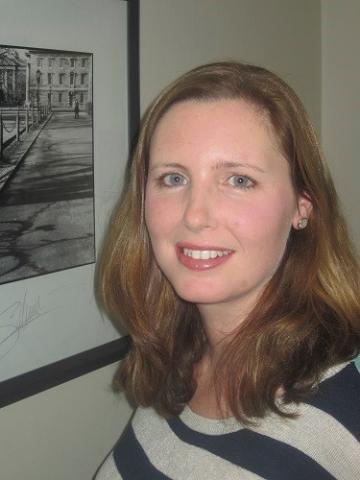 Being singled out for special recognition this year is 2013-16 BrightFocus grantee Sarah Doyle, PhD, of Trinity College Dublin (TCD), who’s been selected to receive a Genentech Age-related Macular Degeneration Fellowship from the ARVO Research Foundation. The fellowship is one of two given yearly to noteworthy young investigators under the age of 40, and carries a research stipend.

The award was given to further Doyle’s outstanding basic investigation into the inflammatory triggers of AMD. “The proposal [for the fellowship] was to look at the relationship between retinal pigmented epithelium (RPE) metabolism and unchecked triggering of the inflammasome,” Doyle said. “I'm trying to get to the root cause of inflammasome activation—what starts it off?”

That’s also the aim of Doyle’s  current BrightFocus project, where she’s looking at how immune sensors  known as  toll-like receptors (TLR) become activated and contribute to the AMD disease process. Normally TLRs serve as the main sentries and scouts of the eye’s immune system. They are there to recognize the entry of a virus or bacteria, and initiate a defense against infection. However, in AMD they trigger an inflammatory response for no apparent reason.

Doyle will be sharing the latest results of her BrightFocus-funded investigation at ARVO (see details nearby).  It’s one of more than 100 presentations of BrightFocus-funded research being featured at this year’s ARVO. Look for coverage ahead.

If Doyle’s name sounds familiar to you, it’s because she has been in the limelight before. In the recent past, she and co-investigators at TCD, including Matthew Campbell, PhD, and Luke O’Neill, PhD, collaborated on an earlier, 2011-13 BrightFocus grant to Peter Humphries, PhD.  Under that grant, they discovered that not all inflammatory molecules are equal, and that increased levels of one naturally occurring inflammatory cytokine known as interleukin 18 (IL-18) may serve a protective role that could have therapeutic relevance. Their widely-published results advanced the hypothesis that increases in Il-18 actually help, rather than hinder, the eye’s recovery from choroidal neovascularization (CNV), which is the growth of wet, leaky blood vessels seen in wet AMD.

[Watch a video on their discovery: https://www.youtube.com/watch?v=QkjDkH5yDe4.]

These results seemed counterintuitive, as inflammatory factors had been considered uniformly harmful to the RPE cells of the eye, which nourish and maintain the retina. The work met with skepticism in some circles, and continues to be debated at researcher forums.

Nonetheless, the team’s ongoing investigation into IL-18 continues to support the hypothesis that it confers protection against CNV.  That work has progressed to the stage of preclinical testing in non-human primates, and only a few hurdles remain before they’ll be in a position to seek FDA approval to conduct Phase 1 clinical testing in humans. Summaries of the work have been posted on the BrightFocus website:  “Promising Research Looks to Clinical Uses of IL-18 to Prevent Wet Age-Related Macular Degeneration (AMD) (April 2014)” and “Results Published on Potential New Treatment for Wet AMD” (August 2015).

The intense scrutiny given their earlier work has made it all the sweeter for Doyle to be honored with the Genentech fellowship.  She admitted that she is beyond pleased, and told BrightFocus that “affirmation is the right word for it!”