AMD On the Rise, According to National Academies Report

Calls for Greater Research Effort to Save Sight

The vision of millions of many Americans is in jeopardy, according to a new report by a leading national science board, which specifically cited growing rates of age-related macular degeneration (AMD) in its study of the rising toll of vision disease. 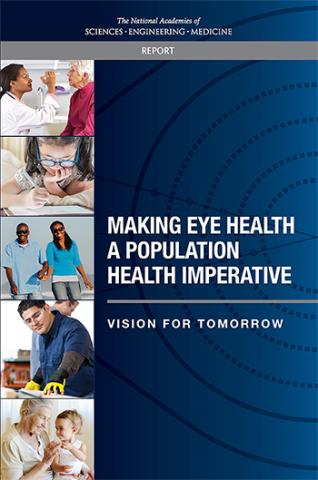 To learn more, click here. The entire 566-page report, or a short version, can be downloaded or read online, free of charge. | NASEM

“Despite the importance of eyesight, millions of people grapple with undiagnosed or untreated vision impairments—ranging from mild conditions to total blindness—and eye and vision health remain relatively absent from national health priority lists,” the National Academies of Sciences, Engineering, and Medicine (NASEM) noted in its report, Making Eye Health a Population Health Imperative: Vision for Tomorrow. The non-partisan, independent panel called for a significant increase in investments in vision research.

AMD is particularly on the rise, the authors note. Between 2000 and 2010, the number of U.S. adults aged 50 and older with advanced forms of AMD increased from 1.75 million to 2.07 million. By 2050 this number will more than double, to 5.44 million, according to National Institutes of Health statistics.

Who are most likely to be affected?   Those most at risk are older, white, and female, the NASEM report states. In the U.S. population 50 years and older, women made up 65 percent of the nearly 2.1 million cases of late AMD in 2010.

Many of the factors that cause AMD cannot be prevented. Age is foremost among them. AMD is caused both by stressors inside the eye, such as drusen and poorly nourished cells; and also by stressors outside the eye, such as smoking and excessive exposure to sun.  Over a lifetime, this damage accumulates and causes oxidative stress and subacute inflammation, both damaging to the eye.  With age, the eye has a harder time protecting itself from these stressors, which explains why age itself is the biggest risk factor for AMD.

[To learn more about how aging affects our eyes and increases the risk for AMD, read a recent interview with MDR grantees working in this area.]

In addition to age, there are genetic susceptibilities to AMD that have been identified, but are not yet treatable. Individually, these small mutations and genetic abnormalities may not exert a great effect, but if more than one is present, or when combined with age and other risk factors, they could become influential. Research is showing that the genetic factors in AMD may work, in part, through a malfunctioning immune system. However, because these genetic factors have been spread across the genome, they are challenging targets for gene therapy.

On the plus side, NASEM cited research that is moving ahead to identify modifiable risk factors for AMD:

The report encourages more federal funding for vision programs and research, as well as public-private partnerships to spread awareness. A coordinated outreach effort to reach at-risk groups is needed, NASEM recommends, and calls upon the nonprofit sector to join with federal authorities to spread awareness of vision health and risks. MDR research findings are frequently shared with both the public and scientific leaders around the globe.

[Read the recommendations of the NASEM study panel.]

The National Academies of Sciences, Engineering, and Medicine is an independent, nonprofit science advisory council signed into law by President Abraham Lincoln in 1863. Many of the nation’s top scientists, engineers, and health professionals volunteer their time to serve on key study panels.