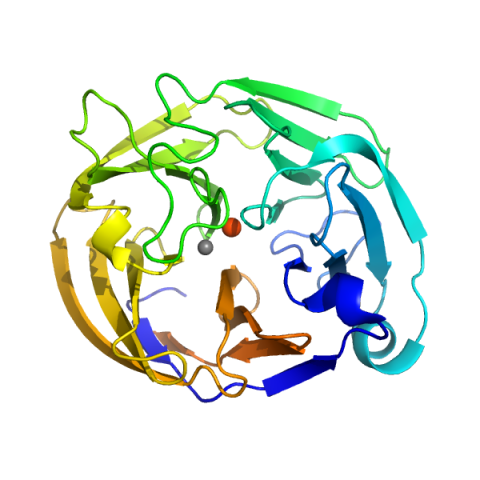 Dr. Lieberman and her team were among the first to discover and create a 3D map the myocilin protein. She describes its crystal structure, shown above, as “exquisitely sensitive” to mutations that destabilize the protein and cause it to aggregate in the eye. Courtesy of Raquel Lieberman, PhD, Georgia Institute of Technology)

What: Dr. Raquel Lieberman and colleagues develop antibodies that can detect human and mouse myocilin, a protein that, when misfolded, is involved in glaucoma.

BrightFocus Connection: This project was supported in part by a National Glaucoma Research grant to senior author Raquel Lieberman, PhD, of the Georgia Institute of Technology in Atlanta.

Why It Is Important: In glaucoma, damage to the optic nerve results in vision loss, and the main risk factor for damage to the optic nerve is an increase in pressure within the eye. In primary open-angle glaucoma – the most common form of the disease – the spongy tissue at the edges of the eye responsible for draining fluid and maintaining pressure at appropriate levels gets clogged. Without proper drainage in this tissue, called the trabecular meshwork (TM), pressure in the eye builds up and leads to eventual damage and vision loss.

A protein called myocilin is normally present throughout the body, and especially in the TM tissue of the eye; however, as is the case with many proteins, genetic miscoding can lead to mutated forms of myocilin that misfold into an abnormal shape. With an earlier BrightFocus NGR grant, Dr. Lieberman and her team were among the first to map the normal three-dimensional structure of the myocilin protein. By now, numerous mutations have been discovered in the myocilin gene and these are believed to account for approximately 3–5% of primary open-angle glaucoma (the most common type) worldwide.

The hypothesis is that when the myocilin protein folds incorrectly, it gets stuck and aggregates, forming clumps inside TM cells along the eye’s drainage pathway, eventually causing blockages that lead to chronic elevated eye pressure. To better understand what myocilin does in the eye, researchers need to be able to differentiate misfolded myocilin from healthy myocilin, which has been the latest research direction of Dr. Lieberman and her team.

In this study funded by Dr. Lieberman’s 2016-18 NGR grant, the group engineered another kind of protein – called an antibody – that can recognize and bind to different versions of myocilin. They generated three antibodies: one that recognizes both folded and misfolded myocilin, one that binds just to the folded version, and a third antibody that recognizes shortened versions of normal folded myocilin. All three antibodies can bind to myocilin from human eyes in addition to that from mouse models, which is important because researchers who study glaucoma use both rodent tissue and that from human donors to better understand the disease.

The team hopes that the availability of these antibodies will allow their group and others to gain further understanding of myocilin’s role in glaucoma, including when misfolding problems start and how that causes damage to the TM. If so, their results could bring about new ways to diagnose and treat glaucoma.