In 1995, with his ophthalmology residency a few years behind him, Joel S. Schuman, MD, received a BrightFocus grant to delve into the genetics of glaucoma. And before a decade passed, he and his colleagues were the first to identify a molecular marker for human glaucoma.

His second BrightFocus grant, also from the National Glaucoma Research (NGR) program, came 15 years later. This time he used the funding to improve an existing OCT imaging technique that allowed clinicians, for the first time ever, to visualize the entire drainage pathway in a living human eye and measure how well it functions to avert the fluid back-up that can lead to chronic pressure elevation and glaucoma.

“No one else is currently capable of making these measurements, and the information provided is at the very core of the processes that result in eye damage,” Schuman, then at the University of Pittsburgh Medical Center, wrote. “We are incredibly excited to be part of their development, and cannot sufficiently express our gratitude to those willing to support this work.”

For a young researcher, especially one who’s also treating patients, the two projects would represent major achievement. And yet in the 15 years between his BrightFocus grants, Schuman had an even bigger breakthrough. He was part of the team that discovered and rapidly developed optical coherence tomography (OCT), the imaging technology that, within a short time, has revolutionized vision care.

Dr. Schuman relived that discovery in an interview with MSNBC’s Richard Lui at this year’s "An Evening of BrightFocus," where BrightFocus presented Dr. Schuman with its Scientific Impact Award.

OCT “is a way of making a three-dimensional map of the back of your eye. It’s like taking a photograph that has three dimensions, instead of just a flat picture, and that lets us look at different layers of tissue in the back of the eye,” Dr. Shuman said.

That, in turn, makes it possible to detect and manage blinding diseases, such as glaucoma, macular degeneration and diabetic retinopathy much earlier, before vision loss has occurred. Whereas a decade ago, OCT was still being evaluated in animal experiments, it has since become the gold standard. More than 60,000 OCT scanners are in use globally for early detection and treatment of blinding diseases.

Dr. Schuman told Lui that research is “basically, curious people looking at problems.” He also described how it felt to be part of OCT’s discovery.

"There was a team, six of us. Some of us were physicians, some engineers, and there was a physicist involved. We were working together to be able to create a technology that would do measurements,” he said. “First it was just measurements along a line, and then one of us, David Huang, had the idea that ‘if you scan it this way, you can make an image.’ And then, if you do that very fast, side by side, those cross sections become a 3D image.

“It was really exciting,” he said. “It was the ‘aha moment,’ the thing that you always want when you’re doing research, that time when you realize this is something new that’s never been done before that’s going to be really important.”

Accepting the award, Dr. Schuman thanked BrightFocus for its support, which provided not only funding but also the lift of confidence that helped him to reach new heights. He described how much that support meant to him, and the boost it provides to other scientists in need of “angel investors.” 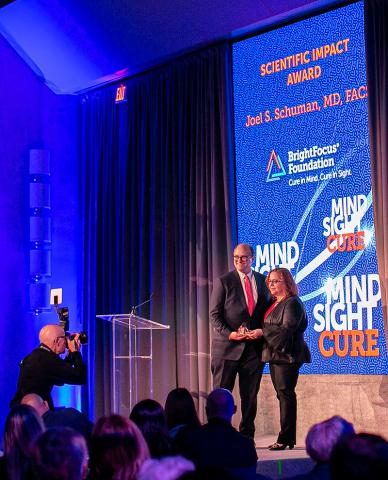 Dr. Schuman accepts the award from BrightFocus President and CEO Stacy Haller at “An Evening of BrightFocus.”

“To be honored by this organization is particularly meaningful,” Dr. Schuman said. “BrightFocus believed in my work when I was just starting out. Their support made a difference in my ability to pursue work as a clinician-scientist.

“I cannot tell you how many times I’ve heard, ‘If it weren’t for BrightFocus, I could never do this research,” he added.

What’s especially valuable about the BrightFocus mission is “its focus on young investigators,” he continued. “They are our future, and BrightFocus has the foresight to invest in them, as the organization invested in me.

“I have been privileged to be involved in research that has made a difference in people’s lives around the world. This would not have been possible without BrightFocus. Thank you!”

Dr. Schuman’s early career illustrates the magic that can happen when grant funding reaches a determined energetic scientist at the right time – such as when he or she is in the grip of an innovative idea and has the right training, knowledge, and connections to pursue it. With a good project design and generous donors behind him or her, there’s so much that can be accomplished.

New Work to Discover Glaucoma’s Roots in the Brain

His career started with a medical degree from New York’s Mount Sinai, residency at Medical College of Virginia, and a fellowship at Massachusetts Eye and Ear, where he focused on glaucoma. Next stops were New England Eye Center at Tufts New England Medical Center, where he headed residency training as well as the Glaucoma and Cataract service; and University of Pittsburgh Medical Center, where he chaired the department, directed the Eye Center and also had a thriving research career focused on imaging advances.

In 2016, Dr. Schuman was appointed director of New York University’s NYU Langone Eye Center, as well chairman of ophthalmology, and professor of neuroscience and physiology at NYU School of Medicine. He also serves as professor of biomedical, electrical and computer engineering at NYU Tandon School of Engineering. Over the years, with new leadership roles, he’s acquired broad administrative responsibilities. And, like many in his position, he’s been “giving back,” serving as a mentor and collaborator to other rising stars in the vision field.

And yet he remains, at heart, a clinician-researcher, intent on covering new ground in the science behind glaucoma.

He’s still active in genetics, collaborating on major consortium-led discoveries of new glaucoma genes. And he’s been a co-principal investigator on recent BrightFocus NGR grants to Kevin Chan, PhD, a protégé at UPMC who has joined Schuman’s faculty at NYU.

Not surprisingly, the two are taking off in new research directions. Using another imaging technique, functional magnetic resonance imaging (fMRI), they’re exploring the visual pathway of the brain and discovering very early changes that they believe are antecedents of glaucoma that can be detected well before measurable vision loss.

Imaging – and exploring the eye and brain with new technology – are major themes in Schuman’s career. And yet there still another side that will come out in any conversation. And that’s the side that takes care of patients and is constantly looking to ease the burden of glaucoma and other eye diseases.

“I’m really excited about what’s happening in ophthalmology, and how we’re able to take care of patients in a less risky, more effective, way,” he relates on an NYU Langone video. “It is a very wonderful specialty, in that there is very often an immediate change for the better.”

When asked about the latest advances at a recent ophthalmology meeting, the renowned researcher did not talk about imaging at all. Instead, he shared his excitement over new long-acting drug delivery systems that will untether people with glaucoma from the necessity of administering eyedrops once or multiple times daily. He believes these new treatments are just around the corner.

It’s perhaps no surprise that, along with his other activities, he is helping to develop a new, long-acting eyedrop that uses an innovative, thermosensitive gel technology. Administered as a drop, it becomes a gel upon contact, and conforms to the eye’s shape. As a gel, it stays under the eyelid, releasing medication for a period of several weeks. [Read more about the eyedrop.]

Like any new drug, this new product will face a series of clinical trials as part of being evaluated for possible FDA approval.

If that happens, it will have major impact. And for Joel Schuman, it will count as another “first.”