In two studies receiving international attention, 2013-16 BrightFocus grantee Rik Ossenkoppele, PhD, of Vrije Universiteit (VU) Medical Center, Amsterdam, and colleagues in the Netherlands have lent confidence to our understanding of how Alzheimer’s develops. Their findings help confirm that amyloid beta (Aβ) peptide levels start to build up and aggregate long before Alzheimer’s symptoms develop, and are predictive of disease.

Published in JAMA on May 19, both studies were meta-analyses, studies that are conducted by doing statistical analyses on aggregated data collected in previous research. While researchers can control for variations in data sets and other factors that might impinge upon scientific accuracy, meta-analyses, because they rely on second-hand data, cannot offer proof. However, these studies have provided a reassuring level of support for what already has been observed and hypothesized about the biologic timing and course of Alzheimer’s disease (AD).

“These reports are the largest and most detailed to date,” commented Roger N. Rosenberg, MD, a neurologists and long-time editor of JAMA Neurology. His editorial accompanied the studies in JAMA. 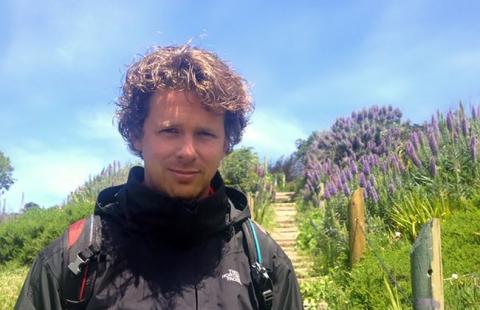 Rik Ossenkoppele, PhD
Read a Q/A with the researcher following this report.

To conduct the studies, researchers first searched scientific literature to identify previous studies where amyloid pathology was confirmed using existing techniques (cerebrospinal fluid, CSF, biomarkers or positron emission tomography (PET) imaging. Then, thanks to cooperation from many researchers they contacted, they were able to crunch numbers on amyloid burden from shared data involving 9,500 people enrolled in 55 Alzheimer’s and/or amyloid beta (Aβ) detection studies on five continents.

One of the meta-analyses looked at the prevalence of amyloid pathology in persons without dementia (Jansen et al, 2015), while the other analyzed rates of Aβ positivity in people with Alzheimer’s disease (AD) or other dementias (Ossenkoppele et al, 2015).

Results confirmed that the ApoE4 mutation, a known Alzheimer’s risk factor, accelerates amyloid accumulation.  Amyloid was two to three times more prevalent in subjects with the ApoE4 phenotype than in noncarriers, and this association went up with age and a diagnosis of cognitive dysfunction.

Why Are These Findings Important?

While amyloid and even Aβ peptides are present in the human body throughout life, and serve some normal functions, Ossenkoppele and colleagues provide support for the idea that abnormal amyloid accumulation in the brain is an early process that drives Alzheimer’s. Early plaque formation may trigger other neurodegenerative changes, such as the misfolding of tau amyloid proteins into neurofibrillary tangles known as tau tangles; the loss of synapses, or “connection points” that transfer signals between neurons; and overall brain atrophy, or shrinkage, resulting in a measurable loss of brain volume. All these factors in combination are sometimes described as a “neurodegenerative cascade.”

With Aβ build-up as a key driver, these changes typically remain hidden in the brain for up to two decades, that is, until significant damage already is done, or in progress. Typically, it is only then that the recognizable symptoms of Alzheimer’s will prompt a diagnosis. And unfortunately, when that happens, cognition and quality of life tend to quickly decline. Currently there are no drugs to stop Alzheimer’s changes from happening, only ones that mask the symptoms. Life expectancy for the typical Alzheimer’s patient after diagnosis is about eight to 10 years, on average.

In contrast, when patients are diagnosed early—in prodromal (ie, asymptomatic) stages, or with minor cognitive impairment (MCI), a type of forgetfulness on a par with normal aging—it’s still possible to enjoy a high quality of life. People with MCI have time to plan for what’s ahead. They can also make lifestyle changes that have been shown to minimize and even delay cognition changes in some people, involving nutrition, exercise, social interaction, and mental activity.

Currently, drugs that might slow or stop Aβ build-up are being tested in clinical trials. These anti-amyloid agents belong to a new category of drugs labeled “disease-modifying treatments” because they are designed to actually slow or stop Alzheimer’s changes, not just mask symptoms. Some of these agents were tested in earlier trials, and failed. Experts believe that the reason they failed is because they were started too late—after devastating neurodegenerative changes had occurred.

So, this new evidence from the Netherlands is important because it supports the hypothesis behind a new treatment strategy. It suggests that it may, in fact, be possible to modify the course of Alzheimer’s by inhibiting amyloid buildup, as long as treatment starts early enough. That’s extremely promising.

It also underscores the value and even necessity of quantifying AB levels and plaque burden at baseline in clinical trials, particularly those involving anti-amyloid agents. A drug that attacks amyloid cannot be expected to have an impact on other potentially confounding causes of dementia, such as vascular disease, brain atrophy, and other conditions.

“Immunotherapeutics are now at a critical juncture,” Rosenberg said in his JAMA editorial, citing the three clinical trials now in progress. One of these is the Anti-Amyloid Treatment in Asymptomatic Alzheimer’s Study (“A4” for short) being co-led by Riesa Sperling, MD, of Harvard. A 2010-13 BrightFocus grantee, Sperling helped develop PET imaging for early amyloid detection.

While still other therapies are envisioned up ahead, anti-amyloid therapy now looks extremely promising despite a backdrop of earlier, failed trails. Many think it will work if used earlier, before amyloid sets in motion irreversible changes that affect cognition.

Where Does Tau Fit In?

Amyloid” is a generic term for numerous different fibrous protein structures that are present naturally in the human body. While some of them have a normal function, many have been associated with disease and neurodegenerative disorders. Beta amyloid (Aβ) and tau amyloid are the two types specifically associated with Alzheimer’s disease (AD). Read more about how the tau protein is related to the development of Alzheimer's disease.

Ultimately, researchers, clinicians, and health-conscious consumers will have to grapple with the question of whether the same tools being used in clinical trials to stratify AD risk, such as genetic subtyping and amyloid detection using  imaging or biomarkers would prove useful in the general population. Today, the cost of these tests is prohibitive for most individuals outside of a clinical trial which covers those costs. Another dissuading factor is that many people would not choose to know ahead of time that they’ll develop Alzheimer’s if there is no treatment available to stop it.

All that that could change if anti-amyloid agents prove effective. There may be a move to bring down the cost of amyloid detection and make it reimbursable through Medicare and/or private health coverage. Doing so would represent a new front in the war against Alzheimer’s—a war that’s really only getting underway.