Alzheimer's disease (AD) is the most common cause of dementia and the sixth leading cause of death in the United States. It is critical that we find new therapies to prevent and treat AD. The experiments in this proposal are designed to find new pathways by which toxic forms of beta amyloid (Aβ), a peptide associated with AD, damages microtubules, tube-like structures used to move components around in cells, including neurons in the brain. Typically, damage to microtubules is blamed on abnormal tau formations in the Alzheimer’s brain, but we plan to test the novel hypothesis that Aβ has neurodegenerative effects independent of tau that affect microtubule stability, and that microtubule stabilizing agents can protect neurons against Aβ neurotoxicity. New drugs will be tested to determine if they can reverse some of the detrimental effects of Aβ accumulation in the brain.

We are helping to generate new treatments for AD by researching how cellular defects arise and developing strategies to prevent or reverse them. Our specific interest lies with microtubules, tube-like structures used to move components around in cells. Normal tau protein helps maintain the structure of microtubules, but this is disrupted in AD. However, our focus is not on tau, but on other pathways to microtubule damage, including the role of toxic Aβ. We are testing the novel hypothesis that Aβ has neurodegenerative effects independent of tau and that microtubule stabilizing agents can help protect neurons against Aβ neurotoxicity.

The first part of my project aims to determine how it is that Aβ damages neurons, and whether the pathways involved in causing this damage in AD are distinct from tau-dependent pathways. We are studying these problems both in neurons cultured in dishes, as well as in mouse models of AD.

The other major component of my research involves testing various drugs and compounds for their ability to restore the function of neurons damaged by beta amyloid. The current understanding in the AD field is that the effects of toxic Aβ depend on the presence of tau, and most current treatment strategies are contingent on this. However, we believe that Aβ has effects that can be treated even before tau pathology is present. We are testing specific drugs that block cell channels that we believe get activated in the presence of Aβ. For the first time, our research will test the feasibility of these channel blockers as AD drugs to rescue cells from Aβ-induced microtubule disruption and dystrophic neurite formation. If we are successfully able to reverse the effects of Aβ using that treatment strategy, it would open up a whole new avenue of drug development in AD. In addition, the field would gain tremendous knowledge from our better understanding of the relationship between Aβ, tau, and AD progression. 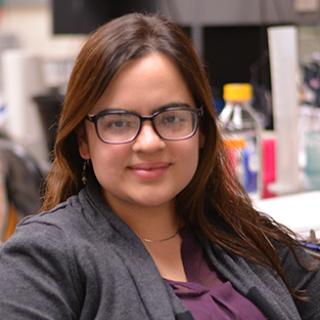