Frontotemporal dementia is a form of dementia in which behavior and language are first to show dramatic changes, unlike Alzheimer’s disease, which typically begins with memory disturbance.

Richard*, a tidy and efficient 56-year-old actuary, surprised his family and co-workers when he impulsively splurged on a new Porsche. His friends realized something was very wrong when Richard began to stay out late at night, frequenting bars, provoking other patrons and flirting with young women. The first psychiatrist he saw suspected this was a manic episode. Treatment with mood stabilizers didn’t help. Richard’s plummeting work performance threatened the continuation of his employment. His psychiatrist reconsidered the diagnosis, obtained neuropsychological testing and an MRI, and diagnosed Richard with behavioral variant frontotemporal dementia.

Marilyn, a 61-year-old copy editor, visited her ophthalmologist hoping to understand why the words she was reading weren’t making sense to her in the same way as they had for years. New glasses were prescribed and obtained, but this didn’t help. When Marilyn became more frustrated and anxious, her sister brought her to a psychiatrist, who examined her and noted her diminished ability to understand some common words even though she could repeat sentences without errors. Marilyn had developed a variety of primary progressive aphasia called semantic variant frontotemporal dementia.

Tom, a 68-year-old retired longshoreman, was referred to a neurologist by his geriatrician. Tom had been diagnosed with depression but wasn’t responding to antidepressant treatment. He was fatigued, forgetful, and fatalistic in his outlook. He also had begun to fall and felt uncharacteristically clumsy. Tom asked about his “muscle twitches,” which he thought were a sign of anxiety. They were, in fact, undulating ripples of muscle activity (called fasciculations) that occurred from his chest to abdomen. Tom’s cognitive and muscle changes were early signs of developing amyotrophic lateral sclerosis with frontotemporal dementia.

*The names and details in this story are composite and fictitious. They do not identify specific individuals.

Three very different people with three very different concerns all turned out to have neurodegenerative disorders of their frontal and temporal lobes. Frontotemporal dementia (FTD) includes several different clinical syndromes: clusters of symptoms often seen together, and these syndromes express brain changes due to multiple different causes. Although the syndromes of FTD differ clinically, they are linked together because they reflect different functions of the frontal and temporal lobes: behavior regulation, language, and muscle control.

FTDs are believed to account for about five percent of what are known as major neurocognitive disorders. They are even more common among people with dementia that began before age 65. Among the ways that FTD can present, three important syndromes will be described here: behavioral variant frontotemporal dementia [FTD(bv)], language variant FTD [FTD(lv)], and amyotrophic lateral sclerosis with FTD [ALS/FTD]. 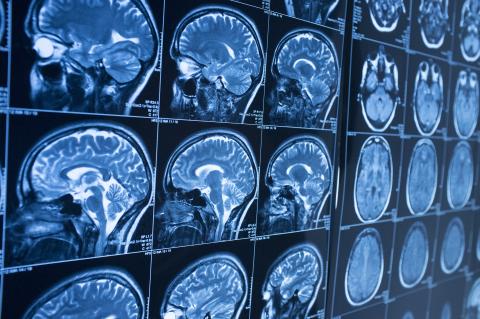 Richard’s condition was FTD(bv), a behavioral variant of frontotemporal dementia, and his symptom presentation initially looked like mania. Similar to a person with mania, Richard was energetic, impulsive and dysregulated. Richard’s lack of conformity with social norms was accompanied by aggressive outbursts and unusual lack of empathy and loss of concern for others. Others with his condition might also show neglect of their work or appearance, compulsive or repetitive behaviors, changes in eating habits or diet, ingestion of inedible objects, poor decision-making, vulnerability to scams or poor financial decisions, disorganization, agitation, or violent behavior. Lack of insight can be notable. In some people with behavioral variant FTD, apathy, and loss of initiative are more prominent than activation and disinhibition. Apathy can easily be mistaken for depression at first, but often is not accompanied by sadness, crying, loss of enjoyment, or suicidal thoughts and behaviors.

Marilyn’s condition was FTD(lv), a language variant of frontotemporal dementia, and this type of FTD typically appears in one of three forms. Her semantic dementia destroyed her understanding of the meaning of words even though she remained able to produce speech and repeat sentences. Over time, the person with semantic dementia may speak more vaguely or omit words. They can have trouble remembering the names of objects. Eventually, memory and behavior problems can also be seen.

Two other forms of FTD(lv) are described: non-fluent aphasia features a progressive difficulty producing the lip and tongue movements required in order to speak. Speech becomes effortful, slow, and ungrammatical. Instead of producing normal complicated sentences, the person with non-fluent aphasia often speaks in short phrases, missing the connecting prepositions and including wrong words. Understanding of single words is preserved, but long sentences are likely to be overwhelming. Eventually, language expression may be completely lost, resulting in muteness. In the logopenic variant, people have trouble finding words and speak more hesitantly as they search for the correct word. They are able to understand the meaning of words and their speech is not labored. Repetition is difficult for them and they sometimes substitute meaningless sounds for words.

Tom’s illness was clearly not simply a psychiatric depression because depression does not include muscle weakness and fasciculations. Evaluation of his nerve conduction velocity and neuropsychological status revealed that he had frontotemporal dementia along with disease of the motor cortex brain cells, the neurons that control muscles. This is one way that amyotrophic lateral sclerosis (ALS) can present. When FTD and motor neuron disease are both present, a person can develop muscle weakness leading to difficulty walking, grasping a pen, lifting their arms over their head, or performing precise small muscle movements. Physical examination reveals muscle twitching, spasticity, and atrophy as well as weakness. Over time, difficulty with speech and swallowing can be noticed.

As yet, we have no definitive treatment for FTD, but there are valuable information resources for caregivers and patients through the Association for Frontotemporal Dementia (AFTD).

Symptom-oriented medication treatment can be used to help with apathy, depression, mania, agitation, irritability, aggression, or delusions. Cognitive rehabilitation and speech therapy may address some language and swallowing difficulties.

Unlike Alzheimer’s disease, which typically begins with memory disturbance, FTD is a dementia in which behavior and language are first to show dramatic changes. Early recognition can assist patients and caregivers in the difficult journey associated with FTD. In time, we hope that research will identify disease-modifying or preventive treatments.