This year’s Nobel Prize in Medicine went to a 71-year-old Japanese cell biologist for his discoveries involving autophagy. That work—a quantum leap forward in our understanding of how cells work in the human body—laid the foundation for potential cures for diseases of mind and sight, including research funded by BrightFocus. [See list at end.]

This year’s winner, Yoshinori Ohsumi, PhD, of the Tokyo Institute of Technology, was honored for his work elucidating autophagy, a cellular form of waste disposal and recycling that helps defend and renew many cells in the body, including the precious nerve cells of the eye and brain.

“Autophagy” originates from the Greek words auto-, meaning “self,” and phagein, meaning “to eat.” This concept of cellular "self eating” was seen as early as the 1960s, when researchers noticed that a cell could destroy its own contents by first enclosing them in membranes, then transporting them to a recycling compartment (called a “lysosome”) for degradation.

However, autophagy’s significance wasn’t well understood until the early 1990s, when Ohsumi carried out a series of experiments with yeast cells. He was able to show how autophagy recycles or disposes contents of cells as part of keeping them healthy, and identified some of the genes involved.

Ohsumi and colleagues also established that similar sophisticated machinery is used by human cells. Autophagy is one of the ways our cells have of resisting infection, adapting to starvation, and removing unwanted and/or diseased parts. When autophagy stops working, the result can be disease or cell death.

Role in Macular Degeneration and Alzheimer’s

Sinha is using a new 2016-18 grant from BrightFocus’ Macular Degeneration Research (MDR) program, as well as a recently completed 2014-16 grant, to study the role of autophagy in age-related macular degeneration (AMD). 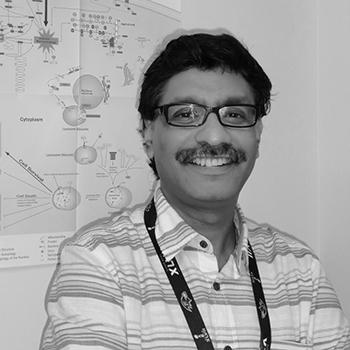 The retinal pigmented epithelium (RPE) of the eye, which nourishes the light-sensing photoreceptors of the retina, depends on autophagy to function properly. Like most nerve cells in the body, RPE cells are non-dividing, meaning they can’t replace themselves when injured or depleted, unlike skin and cells of other tissues. Instead, the RPE relies on autophagy to stay in mint condition.

Among other things, autophagy helps RPE cells dispose of and recycle “used” parts of the retina, including photoreceptor end segments, which burn out and need to be discarded about every 10 days. “Here you have a highly metabolic cell that doesn’t divide. Instead, it degrades photoreceptor end segments by deleting various amino acids and recycling them through the body,” Sinha said.

Autophagy also helps clear the retina of lipids and other debris that could provoke inflammation. Current thinking holds that macular degeneration actually begins in the RPE, when drusen, inflammation, and other threats begin to erode the health of RPE tissue.

Sinha and other BrightFocus grantees are investigating how disruptions in autophagy, caused by age and environmental factors, may contribute to the disease process. They are also tracing the genetic signaling involved. [For a review of some of these investigations, read our recent Science News report.]

Yet autophagy’s importance doesn’t end with the eye. “This is something that may affect many diseases,” Sinha emphasized. For example, Alzheimer’s researchers are asking, “where do [tau] tangles come from?’” and many are speculating that “it’s because the cell does not recycle properly,” Sinha said.

Thus, for AMD, cancer, Alzheimer’s, and other neurodegenerative diseases of mind and sight, Ohsumi’s discoveries loom large. “Many experts acknowledge that this process [autophagy] will play a big role in solving these diseases,” Sinha said.

Less Than a Week Ago, Hosting the Laureate’s Lab Team

Since the Nobel announcement earlier this week, cell biologists around the world have been endorsing Ohsumi’s selection for the prize. Many, like Sinha, have long marveled at the power to cure disease that was unleashed by Ohsumi’s innovative experiments.

In Sinha’s case, there’s also a personal connection. He’s been inspired by Ohsumi’s work, and spoken directly with the Nobel laureate at past international meetings, most recently at an autophagy meeting in China last year.

Also, less than a week ago, Sinha arranged for two close disciples of Ohsumi’s to speak at a session he chaired at the International Society of Eye Research (ISER) meeting in Tokyo.

Noboru Mizushima, PhD, and Tamotsu Yoshimori, PhD, got their start as researchers working in Ohsumi’s lab in the 1990s. Both of them appear as coauthors on a short list of four publications circulated by the Nobel committee in connection with Ohsumi’s work.

This week, in a Wall Street Journal article, Ohsumi named both colleagues as significant contributors to his work, and said he’d considered sharing the award with them:

…shortly before he heard the news, he had been speculating in his own mind that if he were to win the Nobel Prize, he might share it with Noboru Mizushima, a Tokyo University professor, and Tamotsu Yoshimori, an Osaka University professor, both of whom have done significant work in autophagy.

“As chairman, I arranged for both [Mizushima and Yoshimori] to speak at my ISER session entitled ‘Autophagy in Eye Health and Disorders,’ ” Sinha said. “And they kindly accepted the invitation.”

“I always believed Ohsumi to be a good mentor. It’s incredible to think that these two guys helped carry out his Nobel prize work when they were in his lab,” Sinha said. Along with Ohsumi, both researchers now are leaders in the field.

“Sometimes [in this field], it’s amazing how close the connections can be!”

Across all three of its grant programs, BrightFocus is advancing research into autophagy as a way to fight disease. Here are some current projects.

Insight Into the Formation of Harmful Deposits In the Retina
Aparna Lakkaraju, PhD
University of Wisconsin System (Madison, WI)