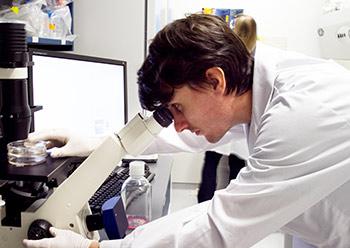 CLARKSBURG, MD—BrightFocus Foundation, which funds research worldwide on Alzheimer’s disease, glaucoma, and macular degeneration, today announced that its 2015 research program grants have been awarded to 58 scientists in 20 states and 7 foreign countries. Part of an $11 million research investment, the grants reflect the largest annual research funding in the foundation’s history.

“When 1 in 16 Americans over age 40 has at least one of these diseases, the need to support research has never been more urgent,” said BrightFocus President and CEO Stacy Haller. She added that these scientists were selected through a peer-review process involving leading scientists and clinicians from around the world.

For the list of 2015 grant recipients, and details on their research, visit www.BrightFocus.org/2015GrantsAwards

Here are some of the trends in this year’s research topics:

Alzheimer’s disease is a progressive, degenerative brain disorder that begins long before the first symptoms appear. With a disease this complex, there are many potential intervention points where treatments may slow or halt its progress.

Alzheimer’s grant recipients are looking at a range of treatment targets, including:

Scientists continue to explore how Alzheimer’s disease develops. They study how chemical changes in amyloid beta and tau, key proteins found in the brain, cause them to become toxic and block neural pathways. Some scientists are creating 3-D models of how Alzheimer’s affects blood vessels in the brain.

Early screening and detection tools are essential, since Alzheimer’s begins in the brain some 20 to 30 years before the first outward symptoms of the disease appear. Researchers are investigating the potential for drugs to slow or stop the disease during this pre-symptomatic phase.

Other topics include genetic factors, harnessing the body’s own protective mechanisms to attack the disease, and controlling risk factors including Type 2 diabetes.

Early detection and treatment are also crucial to controlling glaucoma, which can damage the optic nerve, resulting in vision loss if left untreated. In the US, as many as half of the more than three million Americans living with glaucoma are unaware they have the disease because there are no apparent symptoms in the early stages.  African Americans and Hispanics are particularly at risk.

Scientists are developing novel biomarkers to help detect glaucoma before vision damage occurs. Some are investigating a class of drugs shown to reduce neurological damage, while others explore treatments that target inflammatory proteins and may prove effective in treating glaucoma.

In many glaucoma patients, increased eye pressure can lead to deformation of optic nerve tissues, which may damage nerve fibers in the back of the eye. Researchers are:

In research on genetic risk factors, one study will seek to understand why persons with African ethnicity may have up to five times the risk of developing the most common form of this disease. Others are examining an inherited anomaly that affects the eye’s development and, in half of cases, leads to glaucoma.

Age-related macular degeneration (AMD) is a common eye disease among people 60 and older, affecting as many as 11 million people in the US. The disease causes deterioration of the macula, the central area of the retina, resulting in loss of sharp, straight-ahead (central) vision.

Early detection is crucial to diagnosing AMD. One test will examine a possible early sign of AMD: the retina’s inability to recover rapidly from light exposure.

As with Alzheimer’s and glaucoma research, AMD research is looking at whether the body’s own defense mechanism, the immune system, can be harnessed to defeat the disease.

For more details on the new grantees and their research projects, visit www.BrightFocus.org/2015GrantsAwards

ABOUT BRIGHTFOCUS
BrightFocus Foundation is a Maryland nonprofit supporting innovative research and promoting greater public awareness on diseases of mind and sight. In the past three years alone, the Foundation has invested over $27 million in new scientific research and is managing a portfolio of 150 promising projects worldwide.